The Company was incorporated on April 29, 1985 under the Canada Business Corporations Act ("the Act") as 143818 Canada Ltd. The articles of the Company were amended on July 16, 1986 to reflect a name change to Shore Gold Fund Inc. and to increase the maximum number of directors to twelve. On August 12, 1994, the articles were amended to change the Company’s name to Shore Gold Inc.

Prior to 1993, the Company was engaged primarily in gold exploration and development and was a former gold producer through its interest in the Jasper Mine, which ceased production in December 1991. In 1993, management changed with the appointment of Mr. Kenneth E. MacNeill to the Board of Directors and his appointment as Chief Executive Officer. Between 1993 and 1995, the Company was still primarily engaged in gold exploration. In December 1995, the exploration emphasis of the Company switched to diamonds with the acquisition of mineral claims in the Fort à la Corne area of Saskatchewan. Although the Company has also acquired and worked on base and precious metal properties since 1995, the majority of the exploration effort since then has been devoted to diamonds.

Various exploration techniques on the Company's Star Kimberlite Property resulted in the decision to move forward with an aggressive 25,000 tonne bulk sample program to recover 3,000 carats of diamonds. This decision led to a number of equity financings during 2001, 2002 and 2003 intended to raise sufficient capital to proceed with this program. The 25,000 tonne bulk sample program began in 2003 and included the sinking of a 250 metre shaft, constructing a headframe and hoist, and the construction of a 10 tonne per hour on-site processing facility.

During 2004, the Company transferred its gold properties into its wholly-owned subsidiary, Wescan Goldfields Inc. ("Wescan") (previously Shore Resources Inc.). Wescan then completed an initial public offering concurrent with distribution by The Company of a portion of its Wescan shares as a dividend-in-kind, and listed its shares on the TSX-V. Complete details with respect to this transaction are available for viewing at www.sedar.com in Wescan's Long Form Prospectus dated August 30, 2004.

Significant capital resources were required to keep pace with the growth and expansion requirements and in 2005 two major equity financings took place for total gross proceeds of $236.7 million (see News Releases dated March 22, 2005 and November 9, 2005). Newmont participated in both financings.

Extensive exploration programs were carried out on both the Star and FalC-JV properties, including core drilling, additional bulk sampling and large diameter drill sampling, in order to establish reserves and resources.

In early 2007, the Company selected diamonds weighing some 200 carats, from the Star bulk sample parcel for a cutting and polishing ("C&P") exercise. The stones selected for the exercise included a spectrum of colour from top white to yellow, brown and grey, and generally more challenging shapes. No sawables were included in the C&P parcel. The C&P for the lower quality goods was completed at two manufacturing centres in Antwerp, Belgium and the higher quality goods were processed in Perth, Australia. The C&P exercise was a great success and proved that a high quality polished product can be produced from Saskatchewan diamonds. 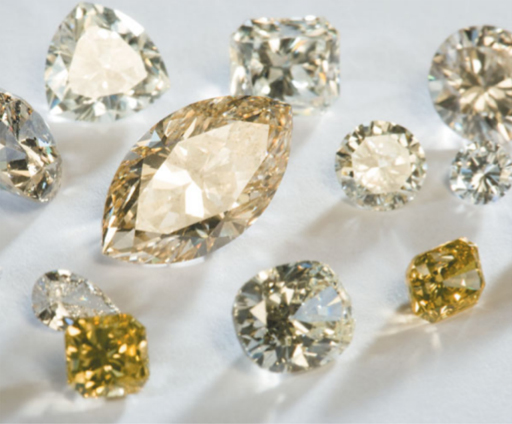 Cut and polished diamonds from the Star Diamond Project

In November of 2008, the Company announced that a Project Proposal for a Star - Orion South Diamond Project (the "Project") had been submitted to the Environmental Assessment Branch of the Saskatchewan Ministry of Environment and federal authorities to commence the Environmental Impact Assessment ("EIA") process and initiate discussion with regulators and the public about the implications of the Project.

The original evaluation of the Orion South Kimberlite, using underground bulk sampling and LDD mini-bulk sampling, was curtailed by the world financial crisis of late 2008. By early 2009, most capital intensive exploration activity had ceased on the Star and FalC-JV properties. Newmont has elected not to participate in the FalC-JV budgets since 2009 and, as a result, its interest had decreased since that time by approximately 9 percent, to 31 percent. From 2009 to 2014, the Company focused primarily on desk-top engineering studies and data analysis. The following is a list of the technical reports completed based on these studies:

During the completion of the pre-feasibility and feasibility studies, the Company undertook various other activities to support the economic models contained within these reports. In 2010, the Company exercised its right to purchase an outstanding three percent net profit interest ("NPI") held by a third party in August 2010 (see News Release August 9, 2010 and Material Change Report dated August 17, 2010). Fifteen claims, three of which are directly associated with the Star Kimberlite, were originally staked by a third party in 1995. These were subsequently transferred to the Company in 1997 for a consideration of the grant of a three percent NPI, payable should a positive production decision be made and the property achieve commercial mineral production. The Company had the option to purchase the NPI any time prior to 90 days after a positive production decision on any of the claims, for $1.0 million.

During 2010 and 2011, agreements were reached with several Aboriginal parties, to gather information on traditional Aboriginal land use and traditional knowledge in the Fort à la Corne forest (see News Releases April 1, May 12, August 18, 2010 and April 21, 2011). The information gathered as a result of these agreements was used in preparation of the EIS. The Company also announced Memoranda of Understandings ("MOUs") with several Aboriginal groups (see News Releases dated May 17 and June 17, 2010, January 19, 2011 as well as May 5, 2014). The terms of the MOUs provide that the parties will engage in discussions concerning potential education and training, job, business and participation opportunities for the Aboriginal groups. These discussions aim to establish mutually agreeable terms for a participation agreement in anticipation of the proposed Project.

In December of 2010 the Company announced that the Environmental Impact Statement ("EIS") for the Star – Orion South Diamond Project was submitted to the Saskatchewan Ministry of Environment ("Ministry") and federal authorities (see News Release dated December 22, 2010 and Material Change Report dated December 23, 2010). The Ministry is the lead agency on behalf of the province and the Canadian Environmental Assessment Agency ("CEAA"), which are jointly conducting the environmental impact assessment of the Project.

The CEAA completed their technical review of the proposed Project and during the second quarter of 2014 released the final Comprehensive Study Report ("CSR") for a thirty day public comment period. The preparation of the CSR and the public comment period were steps in the Federal Comprehensive Study type environmental assessment process for the Project. The CSR contains CEAA’s conclusions about the potential environmental effects of the Project, based on information presented in the Company’s Revised EIS and supplemental information submitted to the Agency in September 2012, April, June, August, December 2013, and April and May 2014. Within the CSR, CEAA concluded that the Project is not likely to cause significant adverse environmental effects when the implementation of proposed mitigation measures is taken into account (See News Release dated June 25, 2014).

In December 2014, the CEAA announced an Environmental Assessment Decision for the proposed Project (See News Release dated December 3, 2014). The Federal Environment Minister announced that the Project "is not likely to cause significant adverse environmental effects when the mitigation measures described in the Comprehensive Study Report are taken into account".

During 2014 the Company filed the final EIS for the Project to the Ministry and the CEAA. The EIS was prepared at the request of the Ministry and includes all updates, revisions, information requests and the Company’s responses. The Final EIS was released for public comment by the Ministry in January 2015. The public was invited to comment on the EIS and the Ministry’s technical review comments. The Ministry is continuing to work on fulfilling the province’s duty to consult responsibilities with First Nation and Métis communities potentially impacted by the proposed Project (See News Release dated January 26, 2017).

In October of 2015 the Company also announced an updated valuation of the diamond parcels from the Project (see News Release dated October 21, 2015). This updated diamond valuation was required for the Revised Mineral Resource estimates for the Star and Orion South Kimberlites. The Parcel Prices show increases between 31 and 125 percent above the March 2008 prices. Model Prices ranging between $161 and $333 per carat have been determined for the diamond populations of the major kimberlite units that make up the Star and Orion South Kimberlites.

In April 2018, the Company announced the positive results of the independent Preliminary Economic Assessment (“PEA”) on the Project. The PEA estimates that 66 million carats of diamonds could be recovered in a surface mine over a 38-year Project life, with a Net Present Value (“NPV”) (7%) of $2.0 billion after tax, an Internal Rate of Return (“IRR”) of 19% and an after-tax payback period of 3.4 years after the commencement of diamond production (see News Release dated April 16, 2018 and Technical Report dated May 30, 2018). The PEA was led by independent mining, processing and design consultants, with support from the Company’s technical team. The PEA cash flow model is based on developing two open pits, initially on the Orion South Kimberlite and subsequently on the Star Kimberlite.

In December 2021, the Company and Rio Tinto announced that the Company has entered into binding agreements with RTEC that comprehensively resolve all disputes between them (See News Release dated December 9, 2021). As part of these agreements, Star Diamond and Rio Tinto have have agreed to revised joint venture arrangements that best position the joint venture to advance the development of a diamond mining operation on the Fort à la Corne property in Saskatchewan, Canada. Under these new arrangements:

These arrangements de-risk the project for Star Diamond and ensure that key project milestones, and the certainty associated with them, will have been achieved before Star Diamond has to contribute any additional capital, while also providing Rio Tinto with a greater participating interest in the project.  They also align the interests of Rio Tinto and Star Diamond in moving the project forward for the benefit of both companies and their respective shareholders.